Some Motorgliding To Inaugurate Spring

I enjoy writing essays on current events and critiques on U.S. policy as much as anyone, but if I keep my face in that stuff too much along with the unpleasant effects of being so limited in my range, my mind threatens revolt by going absolutely bonkers.

Thank goodness the spring weather’s arrived. The past couple of winters have been a bit more difficult to deal with; being not only dependent on my wheelchair for movement but cooped up in the house for months at a time tries the sanity…I confess there might have been some baying at the moon forthcoming if the weather hadn’t changed.

It’s still a touch chilly around dawn, but certainly not cold enough to stop me from resuming my dawn patrol expeditions to do some flying with one of my micro aircraft on my lap at the parking lot I use about a mile away. Today after months of casting wistful glances at the Nine Eagles box in the corner of the living room, I took the little Sky 500 motorglider my friend Karen made possible for me as a Christmas present along, fired it up, and gave it a toss into the light morning breeze. 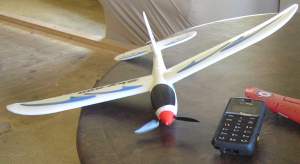 What a fun little aircraft! Sailplane flying would probably bore the adrenaline junkies out there, but it suited me fine today. I had a handful of the little cells that power the Sky…they set me back a whopping five bucks plus another eight added for a wall charger for them when I ordered my present…and that gave me over an hour and a half of flying today. Some people disdainfully scoff at the hobby, but these aircraft are far from toys. R/C flying involves my old professional skills to do it well, it’s therapeutic by making me use my weak hand, and I’ve found few activities that can match it for taking one’s mind off real world problems.

The tiny Sky 500 performed better than expected, climbing well under power and showing a surprisingly flat glide with power off at altitude. It was nicely responsive, dealing well with the gusts and chop that had picked up toward the end of my session. It’s hard to be certain, but I swear I found some patches of lift where the plane gained height even with the motor off…the goal of motorless soaring for models and their full size counterparts.

Today’s outing has whetted my appetite for more soaring. Since I no longer have a car payment to make, I do believe I’ll allot the $70 or so for this plane’s bigger brother, the Sky Surfer, as my next addition. While I’m at it, it might be fun to obtain one of the inexpensive keychain video cameras that are popular these days to get some aerial video.Between the planes I enjoyed last year and these new ones, I’ll have a great diversion from fundraising, blogging and column writing for months to come!

While I fervently hope that I’ll be able to drive long before next winter, I’m grateful to this hobby…it’s a true sanity saver!