With all this nice weather, I’m trying to keep my mind away from anything grim, so when this arrived a couple of days ago, it was just the thing to get me thinking hard about the upcoming flying season. 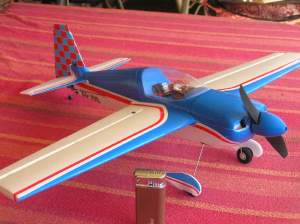 This is a scale replica of the full sized competition aircraft, the Slick 360. It’s my first fun purchase since I paid my Element off, and at around a hundred bucks for it, the micro receiver that’s compatible with my nice transmitter, and a few batteries, I’ll bet it delivers lots more fun this spring than you’d expect a month’s fun budget would yield. Yes, that’s my lighter sitting next to it to give you an idea of its tiny size!

This is a real gem and was just introduced this past fall by Durafly, a line of aircraft HobbyKing’s making. I fell in love with its lines when I first saw it…and it’s even more impressive in person; the fit and finish of the plane is top shelf.

The motor powering it’s another marvel…it’s a strong brushless outrunner about the width of a thumbnail. Look closely at the pic…that’s a small wooden match sitting beside it. This stuff just keeps getting better all the time, and it’s dirt cheap to boot. 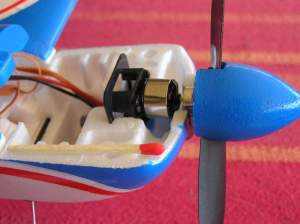 I don’t think I’ll have any trouble flying it once I get back up to speed practicing with simpler planes. Now, whether I can do the maneuvers the fellow in the video below is doing so casually is another story. I’m certain to have a blast trying, for sure.

Every year I say it, and it’s the truth each year: there’s never been a better time to be involved with the hobby!