Anti Claus Is Comin’ To Town

I always enjoy the Christmas season, even though I’m an unreconstructed agnostic. The lights, sounds, foods and spiritual ceremonies all have their own unique appeal, taken in good measure. Sure, many in this country go way overboard sometimes, but that’s just human nature…I define how much of the hoopla I enjoy to suit myself, and neither expect others to share all of my tastes nor share all of theirs. There are plenty of folks who get carried away by the over-commercialization of the holiday, while others’ religious practices frown on celebrating the holiday at all. I’m happy seeking my own balance.

I appreciate the positive Christian themes of renewal, hope, good fellowship and charity as much as I do the older pagan representations celebrating Yule and the winter solstice in various iterations depending on their origins in old Germanic, Norse or Gothic cultures.

Of the lesser known Christmas traditions, my favorite comes down to us from this last, most commonly associated with Austria. I’m speaking, of course, of the Krampus.

The portrayal of our Americanized Santa Claus, traditionally bringing gifts to good boys and girls and lumps of coal to the bad ones always seemed to me to be just a wee bit one-sided and oversimplified.

I mean, really? Some kid’s rotten all year long and his or her only punishment from Saint Nicholas is a lump of coal?

I never quite thought that was fair, frankly. I’ve personally known plenty of little fiends over time that were mean to animals, bullied their peers, and were guilty of all manner of unpleasant things that clearly warranted worse treatment than just getting a lump of coal in their Christmas stockings. When I eventually got online some years ago, though,  it wasn’t long before I discovered the Krampus, and that finally put life back in balance for me.

If you recall your folklore, the original Saint Nicholas was a bishop and thus about as far from wicked as you could ask for. He was known for giving presents to the kids, especially poor ones, who had been good while driving the devil away by admonishing children to behave decently. Human nature being what it is, his good advice and example weren’t always taken to heart. You and I both know that truly nasty kids would only sneer at a kindly old man with what would seem to them a goody-goody message, so legend provides us with a sidekick who’d be up to the task…enter the Krampus.

This frightening creature accompanies Saint Nick on his rounds, ready to scourge bad kiddies with birch switches or even carry off really naughty ones in a sack to be eaten later or cast into the Pit. With his horns, long red tongue and cloven hoofs he makes a hideous sight, guaranteed to scare the worst kids straight.

Ya gotta like this guy…not only does he serve a useful purpose, but he was suppressed in fascist Austria in the 30s, so he can’t be all bad. Besides, he seems to have an eye for attractive young ladies…in modern Krampusnacht festivals they are often singled out for a friendly swat from his switch.

So you’ve been warned, kids, I suggest you be on your best behavior if you encounter this fellow. Be good, mind your manners…and for goodness’ sake don’t forget to donate to worthy causes at this special time of the year! 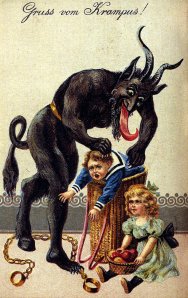